Purpose, Meaning and Vision - a Crucial Triumvirate in Organizations

In almost all fields of human endeavour, we look for meaning. Either it’s the pursuit of meaning which makes us do something in the first place, or we do something because we find it meaningful.

But that’s not to say that we do everything for those reasons alone.

The triumvirate of purpose, meaning & vision should overlap when its needed for smooth running of organizations

There may be actions we perform which may not have as much meaning as we would want them to have. We still end up doing them because we feel compelled to do them for one reason or another. Societal or peer pressure, boredom, need to do it as part of a job- many are the probable causes for such actions.

Many of these actions may be justifiable in the long run. But an absence of meaning is something that demotivates people in performing actions- be it in their personal or professional life. This makes it crucial to have a meaningful pursuit  for your business. And for leaders in organizations, it becomes imperative to provide your team with a meaningful destination to progress towards.

The link between meaning and purpose

To instil meaning in the organization, it’s worth investigating the nature of meaning itself.

One natural effect of a meaningful action is that it makes people more purpose-driven. Given that’s the scenario, it’s interesting to ponder if the reverse is also feasible. That is, if people are given a purpose that they find worthy, doesn’t it automatically result in a meaningful pursuit?

Let’s look at an example. An example in the form of a story.

There once was a woodcutter who lived in a hamlet by the edge of a forest. A single parent, he had a small ten year old boy to look after. The money he earned from cutting wood was barely enough for the both of them. (The school fee for the boy itself was quite high.)

One day, while cutting wood in the forest, he saw a deer whose leg was caught in a thicket of thorns. He helped the deer out of its trap. To his surprise, he found that the deer could talk in the human tongue! It tells him about a place deep inside the forest where treasure lied buried. In return for freeing him from the thorn bush, the deer offers to guide the woodcutter to the place of treasure- a place so deep inside the forest, no human being has gone there before.

The woodcutter is pleased by this development and follows the deer immediately. The purpose he has been presented with is to find the treasure. Now, this purpose he finds worthy of pursuit because of the larger meaning of his life- helping bring his child up well. For that, the wealth from the treasure which the deer promises would be of great help.

So, to restate: the purpose here is the finding of the treasure and the meaning is raising his son well.

To answer the question that was posed before the example, just a worthy purpose in itself needn’t imply a meaningful endeavour- the meaning is essentially a vision that you should have. In the case of the woodcutter, it’s the vision of bringing his son up well.

He is extra-motivated in the task of seeking the treasure because of that meaning.

Vision as the context for meaning 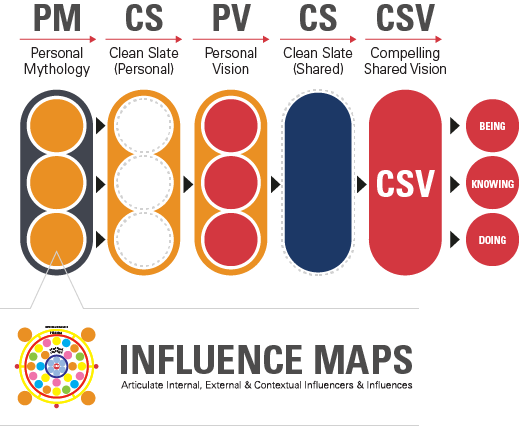 As you can see from the example, a purpose is deemed worthy when it has the support of a meaning.

In the context of an organization, the purpose is to accomplish any task that is the next logical step in the process that the change agents are performing. Now, what would make it meaningful is the True Personal Vision of the leader.

True Personal Vision is the vision that resides in your self and which could be found nowhere else. Unique and formidable, this vision acts as a destination you could guide your team or organization towards.

This gives meaning to the tasks that the change agents perform in the course of arriving at that destination. You could think of it as how someone going from one place to another would find the task of stopping at a petrol station meaningful because it is an essential step that would help him or her complete their journey.