A myth refers to the narrative which a temenos follows. In prosaic terms, myth could be said as the highest form of a story or a legend. Following a common narrative is especially important during a transformative phase of the container. Not only does this make sure that all the archetypes are on the same page, it also forms the road map which the team should trail to arrive at the common destination. This type of myth is called a compelling shared vision.

A compelling shared vision is inherent in a temenos. It’s up to the archetypes- the key players within the container, like the charioteers, nomads and pioneers to uncover this shared vision. The shared vision then becomes the guiding light which the entire team could follow, even through the jarring passages in a transformation journey, if any.

Having such a myth in place is psychologically important, as  it gives the team members a mooring point for their faith in the transformation process. On a more fundamental level, the vision also provides a neat framework to encapsulate the objective of the transformation, and also the path to be taken to reach that objective.

One of the most popular myth types is the monomyth, or the hero’s journey. 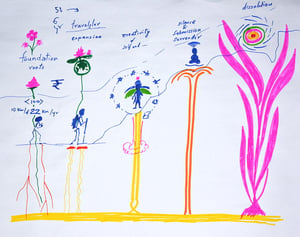 Though the monomyth can be seen in different cultures, its essential structure remains the same. It would have the protagonist or the hero in a particular emotional/physical space at the beginning. But by the end of the narrative he would be at a different space altogether.

On the way to this latter space- or destination- the hero meets multiple characters who play crucial roles in his evolution. Also, he would meet obstacles, that would often test his willpower and physical or spiritual strength. Every time he overcomes an obstacle, he becomes a wiser and better fighter, more adept at tackling challenges.

We could easily draw a parallel between the elements of the monomyth and those in any temenos under transformation. An archetype- a change agent, could be considered the hero. He would have to perform an essential function to make the transformation a success. That’s the hero’s journey he undertakes. To perform well, he would need the help of his fellow archetypes- his colleagues, the people who enrich him during his hero’s journey. Any transformation worth its name would bring its set of challenges. And with every challenge the archetype overcomes, he becomes a better functionary- more experienced, more efficient and wiser.

Under the umbrella of a compelling shared vision, the individual hero’s journey becomes branching narratives within the main transformative journey of the organization. Everyone knows the role they should play because everyone has the same objective in mind. All hands lend their strength because everyone understands the virtue in reaching the destination. It’s a synchronised movement, a chorus with harmony for its spine and a singular vision as the crescendo towards which it soars.

A myth could encompass a whole group- like a family

The hero’s journey is a pervasive motif in literature and films down the ages. From Odysseus to Harry Potter to Han Solo, we have seen the monomyth in all its adrenaline-pumping glory time after time.  But for our example, let’s consider a monomyth in which the protagonist is a woman- a journey that’s not at the forefront of popular imagination.

The myth comes from Irish folklore. The protagonist is named “Red Mane’(Macha Mong Ruad in Irish). She is among the many women in Irish folklore who embody what’s called as ‘flaithius’ - loosely translated as Sovereignty.  The figure of sovereignty is symbolic of the earth force called anima mundi.

In the myth, Red Mane is the sole queen among a long list of High Kings of the Irish land. When it’s time for her to claim her father’s throne, she fights for her right to the throne against the rival kings, who deny her her right because she is a woman. When a particularly arrogant king seeks to destroy her, she meets him on the battleground and defeats him. And when the defeated king’s son tries to continue his father’s campaign against her, she goes after him, driving him deep into the forests of Connacht.

But that’s not the end of rivals for Red Mane. Not by a long shot.

For many are the kings who wish to clinch the throne from this woman, for they wish to continue the patriarchal line in the name of tradition- and if blood should be spilled for that, so be it.

Only, their adversary is no ordinary woman. Not even an ordinary queen. She is a warrior, one who inspired her troop to fight for their kingdom- the container- by her side, and trust in the vision of her rulership. Defeating the kings one by one, she seizes them, bring them to her kingdom as slaves where they are forced to build a fortress for her. The name of the fortress might be familiar to those acquainted with Irish mythology: Emhain Mhacha.

It’s an inspiring tale of a princess leaving behind her protected lifestyle and stepping into the shoes of a warrior, and then a leader. In the process she brings about a major transformation in the Irish land- from the country being strictly patriarchal to being a little less so.

If you wish to delve deeper into the world of myths, there are some superior collections to peruse from different cultures- like Indian, Egyptian, Native American, Greek and Chinese. You are sure to feel enriched, having read them.