A felt sense is the holistic, implicit body sense of a complex situation… A felt sense contains a maze of meanings, a whole textile of facets, a Persian rug of patterning – more than could be said or thought. Despite its intricacy, the whole felt sense also has a focus, a single specific demand, direction or point… One single thing, one statement, or one next step can arise from the whole of it all ~ Eugene Gendlin

American philosopher Eugene T. Gendlin is renowned for two of his theories- “Focusing” and “Thinking at The Edge”. While doing a deep dive into these, I discovered these below listed points -

1. Fallacies in the thought process lead to distorted conclusions.

3. Knowing and describing the sense of ‘Not knowing’.

4. Steps do a careful Check-in with yourself and understand ‘what’s really going on?’ (The theory of Focussing)

5. Thinking At the Edge (TAE)- new ways to articulate what is unsaid (Temenos Articulation Conundrum, it takes an effort to see or describe your experience without using a standard label).

6. When our words divert us from asking the right questions!

7. Getting rid of the cache thoughts (emotional baggage).

8. We all have some biased ideas upon approaching issues- as servants or as owners or both.

9. The reality is very large, so does the quest to find a right answer. Maybe there’s “NO” right answer. Wonder why? Considering the distance of our reach- which is just the cramped part of a gigantic universe mothering to billion galaxies.

10. Finding the true purpose by understanding the lost ones. Even though our architecture is built upon lost-purposes, do we still have a chance to find the right one?

11. The stages of Retreat from your true belief.

12. As I said, maybe there's no right answer but there are right processes, patterns, discussions, experiments, ways, practices for decision-makings.

13. A safety net (Sometimes leaving a line of retreat or escape door saves you from many traps).


Fallacies in Thoughts
What is a fallacy?

I have a hard time wrapping my head around the fallacious thought processes unfolded by the renowned philosophers. Even though it's a single term, they have infinite pool of ideas and debates on it. In old times, Fallacies are considered to be the defects in an argument which leads the argument to be invalid or weak. I think it is still believed to this day as we use the term fallacy like this:

He showed his consciousness of the fallacy of his claim by offering to barter it again and again during the course of the war for land or money.

However the modern theorists have started considering “Fallacy” as an argument, not as the errors in the argument. Though I do have some self-explained views on this - I would prefer to divert from here and focus more on our point of discussion.

There are many kinds of fallacies that are made to appeal a mass opinion, authority, unawareness, and circular arguments. Such as-

We should have a gender biased education system (in sense of giving advantageous opportunities) to encourage more female to educate themselves.

I don’t know how much of this is well-accepted. But I can ensure a mass of individual’s acknowledgment since the idea has become another commodity for the politicians to be exchanged for a large number of votes. When the world is screaming for the equal rights, I don’t know where this argument should be placed. Yet there are countries that still need such efforts to liberate women from all kind of hostilities.

Fallacies are not always untrue or misguided (just because they don’t sound valid). They become riskful when they are used wrongly.

Coming to the thought process, I would not be offendeded if someone says- our civilization has built upon the people and their fallacious thoughts. Therefore, it is really tough to separate the true epistemology of humankind from the counterfeits. (Reference)

Felt sense is a mechanism of inner knowing or internal awareness. And initially, our consciousness doesn’t have the ability to articulate it. Gendlin also adds- anything that doesn’t exist in the boundaries of the conscious mind are stored somewhere in the body. He implies felt sense as one of those elements of the psyche.

In a nutshell, felt sense is not the act of self-expression rather the search of right meanings or words that can be expressed.

So how do we distinguish a felt sense? Is it something close to instinct?
It’s a combination of emotion, awareness, intuitiveness, stories, and embodiment. Every now and then you get this feeling- I saw something out of place, is it my imagination?

What I've said is not quite right. It needs something else. Wait, what is that?

I’m not quite feeling well today. Though I am not sick.

I have been to this place. I feel ... I am not sure how to express it?

These are not the conversations you do loudly. It’s that internal chat you do with yourself. But not necessarily you put attention to these small-small fuzzy feelings.

You are taking a stroll, you saw this beautiful sunset after a long while. Then you start to remember- when was the last time you have relaxed like this and watched the -blue lights infiltrating your skin? Was there anyone with you? Was the sunlight always this pleasantly warm and gentle? You might remember someone that you have a bit of a history with. The emotions you feel at that precise moment may not be all tinkering or all sad, it can be the collection of many things. 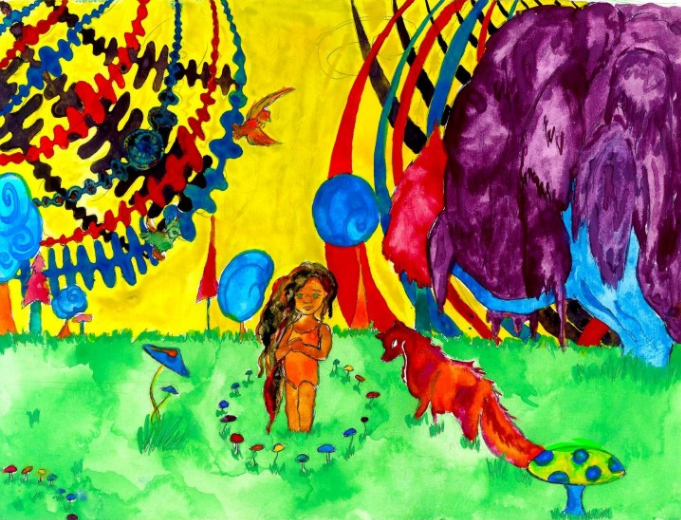 In Gendlin's term, this is a way to describe the Knowing-by-Not-Knowing the aspects of consciousness. To articulate felt sense (something that is non-verbal) needs continuous observation, reflection of the things you're saying and things that are unsaid but needed to be out there with true expressions, and words..

How’re you doing? It took me a while to write this and it’s my second series post of this month. You will find my upcoming blogs explaining the other aspects.

When I chose this topic, I was not sure where to start. And I thought I need 100 brains to understand each of the theories :-)) But I’m quite satisfied as I’m moving forward. Hope you find this treasure of gems to be worthy of your precious time.